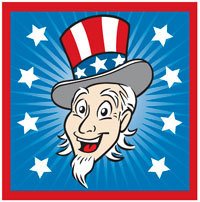 The Library of Congress offers interactive activities on Amazing Americans, Jump Back in Time, Explore the States, Join America at Play, and See, Hear and Sing.

Play Who Is That? and guess the correct president. Another game at a different site, Name That President, has you identify the presidents by their picture.

Watch from a selection of movies on leaders and events in African-American History.

Take this online quiz on state abbreviations, capitals, and locations. Or click here for a game where you identify the highlighted state.

Hernando De Soto explored Florida in 1539 and claimed it for Spain. The University of South Florida has several short movies (2-3 minutes each) online documenting this progression of events, and you can watch them here. Also available for download is a DeSoto Activity Book from the DeSoto National Memorial Park. Some of the activities might be park-specific, but the majority of it is full of fun, well-illustrated, engaging activities for learning the history of DeSoto’s exploration and discovery.

Watch your choice of several movies on Native Americans, with themes from the Buffalo Dance to Bison to Wounded Knee.

Try the Jamestown Online Adventure and see how well you would do as an early colonist!

Click here for another excellent interactive game based on Jamestown!

Pocahontas, Princess of the Powhatan is a computer game that lets you follow Pocahontas in her life both in the New World and then to London.

Take the journey on the Mayflower, tour the ship, or experience the first Thanksgiving at this site from Scholastic!

This site has no games or activities, but is included here because it is unique! Here you can find a list and accompanying biographies of all the signers of the Declaration of Independence, the Articles of Confederation and the Constitution. It also includes biographies of their wives.

Find out fun facts about the founding fathers:

Ben Franklin — Choose from a variety of games at this marvelous site, The Electric Franklin.

Follow the clues to uncover the missing pieces from George Washington’s famous portrait.

Local PBS stations used to run a series called Liberty’s Kids, a cartoon-style program geared for kids on the events surrounding the War for Independence. You can still see Liberty’s Kids on YouTube, although the interactive games do not appear to be available anymore.

Explore the American Revolution in depth with interactive resources and games from BBC.

Mission US has several interactive adventure games based on the Revolutionary War
for grades 5 – 8. Better still, the games are meant for a learning
experience, and the site includes downloadable teacher materials to go
along with them!

Explore the Bill of Rights with the game called “Do I Have a Right?”

George Washington influenced the building of several frigates, including the U.S.S. Constitution. This resulted in the founding of the American Navy. This website is geared for teachers, and is full of activities for all grade levels, and also includes a video to watch.

Choose from a selection of virtual tours of  Colonial Williamsburg.

Watch films on the lives of founding fathers and other early American themes!

Learn about early American life, from clothes to tools to manuscripts and more!

Explore the war from all perspectives in 1759: From the Warpath to the Plains of Abraham created by the Virtual Museum of Canada.  There are also Internet Activities on this site (see sidebar).

“The fate of Baltimore–and perhaps the United States–hinges on your actions.” These are the opening words of the game Hold The Fort, a game of survival, strategy, and nerve in the War of 1812.

Watch the online video from All Hands on Deck about “Old Ironsides.”

A Sailor’s Life For Me lets you explore Old Ironsides, Meet Your Shipmates, and Sail to Victory! Great games for learning about sailing in general, and the USS
Constitution in particular.

PBS has several activities on Lewis and Clark at their site.

Explore the frontier life of Laura Ingalls Wilder with fun games and activities at this site.

Wild West Quest
is a computer game that allows you to travel back to the wild west, c.
1888, and search for hidden objects in 36 frontier locations!

Pioneer Lands
is a computer strategy game. You are a brave pioneer making the long
journey west, and you must conquer obstacles as you travel through
unknown lands.

Hidden Mysteries – Civil War – Civil War computer game you can download. Play Free for one hour and try it out!

These interactive Civil War maps  show you how different battles & skirmishes of the war unfolded.  Follow the events of the Battle of Antietam or Gettysburg, or a number of lesser-known battles, to understand what really happened & how the battle progressed from start to finish.

Click the links to take a video tour or a virtual tour (or both!) of Ford’s Theater in Washington, DC, site of the fatal shooting of Abraham Lincoln. There are also more resources on this page for both teachers and students.

Check out the assembly line and the history of Henry Ford’s Model T Ford on this fascinating video.

Pretend you are coming to New York to start a new life in America in 1916. This interactive game is provided by the Tenement Museum!

Explore the USS Pampanito, a submarine that America built and used during World War II.

This site offers many games on varied government topics, including voting, immigration, balance of power, the Constitution, and the branches of government.

Is political redistribution right or wrong? And what is it anyway? Answer those questions for yourself with this Political Redistribution game form the Annenberg Center.

Get the latest Hands On History Ideas...&